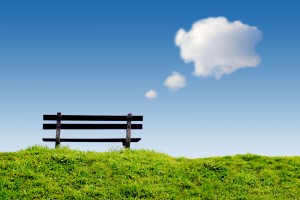 One of my personal heroes, the photographer and creativity keynote speaker Dewitt Jones, has a philosophy I enjoy.  Dewitt says that creativity is a moment.  Just that.  A moment when you see something differently, a moment when your mind opens to new possibilities.  I love that philosophy, and I love that the findings in recent neuroscience research is supporting that concept.

We call them “ah-ha moments”, and we’re learning that they don’t happen when we’re trying to make them happen.  In fact, they often happen when we’re doing something else, when we’re driving, or even when we’re in the shower.  But we rarely admit that, because those moments are usually the result of hours of dedicated, problem solving-based thinking, and so we think more about those hours, and less about the moment, when recalling how the solution came about.  And insights are fleeting, so we sometimes don’t remember the exact moment that it occurred, we only know that we are on to something.

We’ve also got an infrastructure that supports the hours, over the moments.  Not the insights.  We have meetings, trying to solve the problem.  Identify it, clarify it, dissect it, assign blame, identify potential solutions, prioritize solutions based on risk mitigation, and then choose the safest solution.  And then we wonder why the safest solution didn’t work.  We wonder why we just have a new version of the old problem.    And we repeat the cycle, only this time we’re focused on what was wrong with the solution, who’s responsible for choosing it, and what are all the alternatives for addressing what was wrong with it.  And, of course, what’s the safest of those alternatives to choose for creating a new solution.  And then that solution becomes the new problem.  And so it goes.

In his July 2012 TED Blog, http://blog.ted.com/2012/07/13/the-spark-of-epiphanies-qa-with-john-kounios/,  neuroscientist John Kounios notes that this infrastructure extends into scientific research as well, when he says “…often scientists have learned to suppress talking about these insights, because if you’re writing a grant proposal, you can’t say, ‘Here’s a completely different way of looking at the problem.’  They’ll never fund you, not in a billion years. You have to describe this very conservative, step-by-step procedure, even if that’s not how you got to where you are. You might have an insight, you might have an idea, but then you have to go back and cover your tracks, and to describe how you arrived at this in a gradual way, otherwise the granting agencies will say, “This is too risky. You have no foundation for this idea.”

Another of my personal heroes, Albert Einstein, is often quoted as saying “no problem can be solved from the same level of consciousness that created it.”  I couldn’t agree more, but I don’t think we really understand what he meant.  If we did, we’d break the cycle, risk more, try new things, more often.

But the neuroscience is also revealing for us why we don’t do that.  We’re hard wired to think safely.  We’re pre-disposed toward problem solving.  I’m not knocking problem solving.  It has its place, to be sure.  Linear, well thought out solutions have brought us a lot of knowledge, a lot of learning.  But it’s not the same as breakthrough thinking.

Breakthrough thinking is, as Dr. Kounios notes, about short-circuiting the system.  It’s about removing the obstacles that lead us down the same path, over and over again.  It’s about allowing space, and time, for thinking. It requires turning the problem over, turning it on its head, sideways, backwards.

There’s a great example of what breakthrough thinking really looks like in a video making the social media rounds right now. [ted id=1688] Activist and fundraiser Dan Pallotta turns conventional thinking about fundraising, and non-profits in general, upside down, and examines it from a completely different point of view.  It’s bold, it’s thoughtful, and it makes a lot of sense.  But it’s not safe.  It is far from our usual safe, risk-mitigating analysis of the problem with non-profits, or any other business sector, for that matter.  And so, it would be a heavy lift to even think about how to start implementing it.  That’s the other problem with breakthrough thinking.  It’s hard to figure out how to execute on it, because not only are we trained to be linear thinkers, we’re trained to be linear implementers.

Imagine being asked to sit in a room and come up with “creative solutions”.  Where would you start?  How would you make sure your suggestions are, indeed, creative?  As leaders, we ask that of people all the time, yet we’re rarely prepared to help them understand what we’re really seeking.  We have an agenda (good) and we are focused on outcomes (good).  Dee Hock, the legendary founder of Visa, says “Make an empty space in your mind, but creativity will instantly fill it.” But we don’t tend to value empty space, which is what we need in order to reflect on our thinking.  We don’t have quiet space, especially at work, to think differently.  We often don’t have the resources to implement on big ideas, so we don’t want to spend time developing them.  But somewhere between conventional problem solving and big unwieldy ideas, magic lives.  So we have to be willing to see what big and unwieldy looks like.  We can always scale it down.  We can always make it smaller, less complicated, more linear.

But if we always begin with linear, we block our own ability to reach that new level of thinking.

Special thanks go to my friend and colleague, Kimo Kippen, for suggesting this topic.  If you have a topic you’d like to see covered, please leave a reply.