You Need a Producer 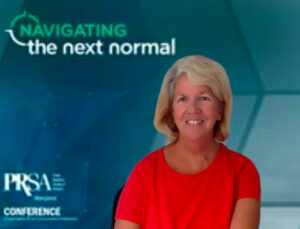 I mean producer as in movie or TV production: the person who stands behind the scenes to make the whole thing go.

Last week I served as facilitator/producer for the annual conference of the Public Relations Society of America (PRSA) Maryland chapter. This professional organization has 42 conferences under its belt, but this was the first all-digital conference.

Fortunately, the PRSA-Maryland staff and conference planners called me in early. At first they just wanted me to manage the tech. But they quickly saw that they needed help with managing format, content, speakers, and a host of details beyond setting up “speaker view” and sharing slides.

For example, the conference team was planning to hold concurrent workshops. Instead of going to meeting rooms at the venue, participants would go to Zoom breakout rooms.

I helped them see that breakout rooms are not the equivalent of hotel meeting rooms. Many of the features that make for smooth facilitation in a full Zoom session, like the ability to set up a slide show or mute all participants, are not available in breakout rooms.

Instead, I encouraged the planning committee to set up plenary sessions only. They couldn’t offer as many different workshops as they would have in a conference venue, but they could make sure that every workshop was a positive experience, free of distractions.

Some speakers did use breakout rooms as they were intended, for small-group discussions within their presentations. Having a producer was useful here, as I set up the breakout rooms, helped the speaker monitor the small groups, and brought everyone back together seamlessly.

Continuing the TV producer analogy, I also vetted talent. That is, I recommended some of the speakers and introduced them to the conference planners. Final decisions about content rested, as usual, with the planning committee and staff.

Once speakers were chosen, I set up 15-minute Zoom meetings with each of them to go over logistics: when they would speak, who would introduce them, how to display their slides. Some people just needed the timing info. A few were new to Zoom, so they needed more support.

Like a TV producer, I handled not only bigger-picture issues but a host of small tasks:

The conference team started calling me Roz, after the producer of Dr. Frasier Crane’s radio show. (Remember the 90s sitcom Frasier?) The conference chair’s name also was Laurie, so the nickname was handy in our planning sessions. During the conference, speakers picked up on it: “OK, Roz, please display poll #1.”

The point is, you need a Roz. I can teach you to be her. Or if you want to be Frasier, I can be your Roz. Minus the sitcom drama, of course.