Reactivity vs Inquiry: A Case Study 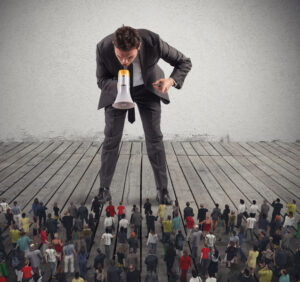 The manager — let’s call him Jerry — would storm into the open-plan area where the writers and designers were working, shout to get everyone’s attention, and then exhort them: “Be creative! You all need to get more creative!”

The writers and designers were flummoxed. We’re making money, right? Clients are happy, aren’t they? Well, someone would say, there was that unproductive meeting last week with the Jackson account. Is that what this is about?

Every few weeks, the scenario would be repeated. Jerry would storm, the creatives would worry, and the tension would get thicker. Meanwhile, clients still were expressing satisfaction and coming back for more ad campaigns.

It took months, but eventually someone looked at the calendar to see what might be setting Jerry off.

Every one of those tirades coincided with a visit from Tom, the company owner.

Tom was putting pressure on Jerry, who in turn put pressure on the creative team — in both cases, in a way that was total nonstarter as a strategy for inspiring more creative work.

The issue here, as is so often the case when organizational culture goes south, was communication. Tom wasn’t unhappy with the work. Rather, he had a basic belief that everything can always get better. His vision involved growth, accolades, and national attention for his agency.

But all he said was “Be more creative!”

And Jerry, not having the skills to find out what Tom meant, simply passed along that unproductive message.

If we were coaching Jerry, we would suggest first that he ask Tom what he means by “be more creative.” He’d find out that Tom has a bigger vision — and that this vision is one Jerry can share.

Next, we’d suggest that Jerry bring Tom in to meet with the creatives, both to share his vision and to learn what’s working and what isn’t. Here’s what can happen:

It all starts with communication. This is the kind of result Jerry could get if his approach to organizational culture was inquiry-based rather than reactive.

How often are you checking in with your staff? Do you know how each of them is doing, beyond project status updates?

Practice an inquiry stance by talking to a direct report about what keeps them motivated as they work virtually. Explain that you’re just gathering information, and guide them to talk only about themselves. Ask questions only, rather than adding your perspective. Show you’re listening, but don’t react with any emotion or judgment. Thank the person for giving their perspective.

Think about a time when your interaction with one or more employees was governed by an external stimulus from the boss, the employee, or any aspect of the work environment. What would an inquiry stance toward that stimulus look like? What questions could you have asked to find out what was really at issue? How might that have influenced the outcome?