How to Deal with the Most Annoying Person in the Office 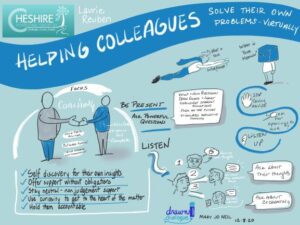 Everyone agrees that Dwight is the most annoying person in the office. He tends to put himself in charge of things. In meetings, he just goes on and on. When it’s someone else’s turn, he interrupts with his own “insights.”

All of the other directors complain to you about Dwight. Even Michael, the VP, said to you, “I don’t know what to do with Dwight. I’ve tried talking to him, and it doesn’t last even one meeting. Maybe he would listen to a peer. Can you try?”

You could walk up to Dwight at the water cooler and say, “Dwight, you really need to let other people talk in staff meetings.”

Yeah, that’s going to go well. In fact, some version of that is probably what Michael already tried.

What can you do instead?

You can take a coaching approach.

The most basic principle of coaching is that you can’t fix another person. You can’t define the other person’s problem and solution. You have to let them do it. Your question to yourself is not “How do I get this person to stop doing this annoying thing?” but “How can I be helpful to this person?”

First you need to know what Dwight is trying to accomplish. Then you can find out whether Dwight thinks his strategy is working for him. If not, you can ask questions to help him find his own solutions.

The hardest part of coaching a peer may be initiating the conversation–at least, that’s what participants in my recent webinar Helping Colleagues Solve Their Own Problems said. They also said they want to avoid conflict and don’t want to hurt the other person’s feelings.

A coaching approach makes all that easier.

For starters, if you want to coach someone, you need to have established some trust. For that, you need a relationship. In other words, you have to stop ducking out of the break room when you see Dwight coming.

Next, if your goal is to be helpful to Dwight rather than making him stop doing what he’s doing, the possibility for conflict or hurt is much lower.

Maybe you can initiate the conversation–in private, not in the break room–right after a staff meeting. You might say, “Hey, Dwight, how do you think the staff meeting went? I noticed that you raised a question [don’t say “problem”!] with your sales numbers, but you didn’t seem to get much help.”

You and I know that Dwight didn’t get help because he never let anyone finish their thought. Dwight may know it too, at some level. But you haven’t accused him of anything! You’re simply telling him something you noticed.

Now, Dwight may look puzzled or annoyed and just say, “I thought it was fine,” or “I don’t have problems with my numbers.”

No, seriously. You can’t help someone who doesn’t want help.

What often happens is that the person comes back after another staff meeting and says, “Yeah, nobody had any good ideas. They don’t really want to contribute.”

You want to say, “Because you don’t give them a chance!” But instead you open a door to further conversation: “Would it be helpful for us to talk about that?”

Again, if he says no, walk away. If he agrees, now you’re in a lateral coaching conversation!

Curiosity is key to your success when coaching your peers. Your goal is to help Dwight diagnose his own problems and come up with his own solutions. Your main tool is powerful questions. Powerful questions:

Armed with powerful questions, you can enact the five principles of peer coaching:

I want to unpack these principles for you, but I’m out of space! If this post has whetted your appetite to finally tackle the Dwight in your office (in a supportive and curious way), please join our webinar Peer to Peer Coaching Conversations on January 13.

You know who your Dwight is. The problem behavior may be different, but every workplace has at least one colleague who annoys everyone else. Thinking about your Dwight, ask yourself these questions:

You don’t have to initiate this conversation today. In fact, most people need time for reflection to shift from a fixer stance to a helper stance.

Helping Colleagues Solve Their Own Problems »