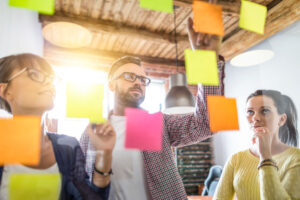 “We need to focus more on profitability,” said Claire, the CFO of a family-owned design firm. “Too many of our projects take too much time in relation to our fees. I’ve prepared a spreadsheet template we can use to decide whether or not a project is going to be profitable enough.”

After a moment of silence, Cameron, a senior designer, said, “But is profit the only thing we care about? What about creativity?”

From here, the conference room erupted, with several people talking at once and getting into side conversations.

In a situation like this, what happens next is crucial—not only for this particular decision but for the health of the functioning team. Let me break it down for you in terms of Otto Scharmer’s model for generative dialogue, Fields of Conversation. 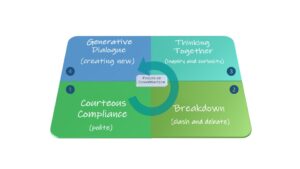 If the team, or specifically its leader, is uncomfortable with disagreement, Claire is going to “win.” But some–maybe all–team members will revert to stage 1, courteous compliance. The term may be new to you, but you’ve seen the behavior: It’s when people go, “Just tell me what to do, and I’ll do it.” It’s the theme song of the disengaged. Compliance is all you get–not engagement, not enthusiasm, not anyone’s best ideas or best work. Furthermore, resistance is likely to resurface down the road.

If the team can deal with disagreement–stage 2, breakdown, in Scharmer’s model–it has the potential to move past courteous compliance. Team members need to hang in there long enough to see the options available to them beyond just Claire’s position or Cameron’s position.  By working through stage 2, breakdown, into stage 3, thinking together, the team can  eventually get to stage 4, generative dialogue. Then the team can do some really creative work, engaging everyone in finding solutions that work for all.

This particular team had an experienced coach (yes, all right, it was me) who wouldn’t let them back away from the clash of opinions. Instead, I had them explore what they had heard so far and what they had to add.

Phil said, “I agree with everything everyone has said. But ultimately, we’re here to make money.”

“Of course we are,” said Gloria. “But if we want to keep getting bigger and better projects, we have to set ourselves apart.”

Cameron came back to his original point: “Aren’t we trying to build something different here? If we only measure profitability, we’re missing really important things, like visibility, the uniqueness of the project, the chance to make a creative statement–things that can’t be measured in dollars and cents.”

Manny spoke for the first time. “So I’m hearing agreement that we want more than just profitability. What I’m not hearing is agreement about what other things to include and how to measure them.”

That’s where the tide turned. Manny’s observation took the group from stage 2, breakdown, to stage 3, thinking together.

No one at that table really believed that profit was the only thing that mattered. What they needed to think about together was what else mattered and how they could measure it.

The group quickly drew up a list of other criteria that had already been mentioned: notoriety, creativity, uniqueness, and more. Already they had moved from stage 3, thinking together, to stage 4, co-creating.

The end result–drafted in that meeting and later refined–was a list of other criteria besides profitability that the team would use to decide whether to take on new projects. The mechanism for implementation was simple: Claire added a checkbox for each criterion to her spreadsheet. A simple Yes-No indication for each would help the team see whether profitability was the only factor in this decision.

Two things were crucial to getting this particular team to the generative stage. One is that I didn’t let the group lapse back into courteous compliance. Like any team that wants to get to true collaboration, this group had to go through stage 2, breakdown, to get to thinking together and generative dialogue.

The other is the specific conversational “plays” made by several team members. Next time we’ll explore how Claire’s Move, Cameron’s Oppose, and Manny’s Bystand led this team to generative dialogue–and how you can do the same.

« This Message Isn’t About Reopening. (It’s about asking good questions.)