How to Overcome Your Overwhelm 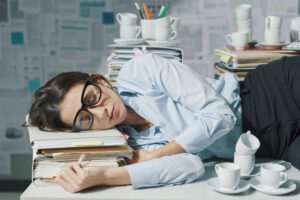 Do you feel like it’s all just getting to be too much? If so, you are not alone. A lot of people are finding that going back to the office is making things harder (again), not easier.

The powers-that-be have been trying to get you to “do more with less” for a while now. Rebounding from the shutdown may be leaving you with even more to do and less to do it with.

For example, a lot of people simply aren’t going back to work, or at least not immediately. So now you’re down a colleague or two or three. And the boss isn’t hiring, partly because there are fewer candidates out there. But she still expects you to get the work done.

That means you have to delegate.

I know it’s hard! Your biggest barrier is probably the overwhelmed state that makes delegating necessary in the first place. And there’s more! Which of the following do you say to yourself? (Choose all that apply.)

A. If I want it done right, I have to do it myself.
B. I want customers to know they can count on me.
C. I want the boss and my team members to think I’m competent and nice.
D. I don’t want to overburden the person I would delegate to.
E. No one on my team knows how to do this.

Let me help you think about it differently.

Instead think about how the work might be chunked. Can you divide up the job by project, content area, customer/client/audience base, or some other way that makes sense? You might make a list or rough map of projects and related areas.

Next, take each chunk in turn. Ask yourself, “Who on my team could benefit from this opportunity?”

Almost always, there’s someone who could gain new knowledge or skills by working on this project. Voila! What started out as sacrificing someone else’s peace of mind now looks like giving them an opportunity for professional development.

If you think the person you want to develop might not be ready, put them in a pair or small group with someone with more experience. The work gets done, the mentor hones their collaboration skills, and the mentee gets experience with this new skill or content.

Also, prepare to be surprised. After I coached my client Endora to delegate this way, she came back to me a couple of sessions later with this story: She put Samantha, a junior manager, into a team of three to work with the vendor to manage a big software system rollout.

Before she came to Endora’s office, Sam had been an office manager. But the office was only two people, so, no big deal, right? Well, during that time, a major disaster struck the office Sam managed–not quite on the scale of a ship getting caught in the Suez Canal, but you get the idea.

Samantha had learned project management skills on the fly. And Endora would never have found out if she had not put Sam on this project.

You may think you don’t have time to manage a bunch of singles, pairs, and trios taking over various parts of the absent colleague’s job.

When my coaching clients tell me that, I ask, “Do you have time in our next coaching session to think about how to structure the work?” They say, “Of course, I can spend an hour.”

When the next session rolls around, they usually have figured out 90 percent of it. They did most of that thinking in the lunch line or on their commute. If they know their people, how to correlate work chunks with team needs becomes apparent pretty quickly.

We spend the rest of the coaching session thinking through the parts that didn’t become apparent quickly. My client goes off feeling relieved–even excited–about how the work will get done.

A session or two later, often as not, they come back with a story like Endora’s about how they were surprised by their team members’ capabilities.

The more you develop your people, the less dependent they are on you.

And the less overwhelmed you–and they–are.

Delegation is a valuable leadership skill. I know I’m making it sound easy. It’s not. It’s simple, but it’s not easy. I can coach you through how to delegate so that everyone wins. Let’s talk!

« 7 Ways Leadership Is Bigger Than You Think