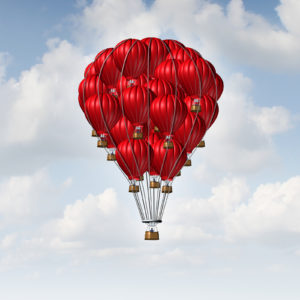 I’ve been fortunate to spend a lot of time lately, pondering and poking at the concept of collaborative leadership. It’s a notion I’ve been drawn to for a long time, because I believe that people will support what they help to create (collaboration), and support is one of the things a leader needs to be effective.

The biggest challenge is this: collaboration and leadership are sometimes at odds with one another, and leaders aren’t always sure what to do with that tension.

Collaboration, on the one hand, is about getting into the mud and playing together. It’s about bringing out the best in all contributors, so that new ideas can emerge from the place where many minds are conversing, converging, diverging, and then converging again.

Leadership, on the other hand, is about, well, leading. Sometimes that means making a tough decision, or choosing among several good ideas. And it’s tough, really tough, to go from collaborating with a team to leading them. In collaboration, there’s an equality that doesn’t always carry over to the place where leadership needs to kick in.

In working with leaders, I’ve come across several common beliefs about collaborative leadership – some true, some false. Let’s take a closer look at seven of those beliefs.

False. Collaborating is about getting people engaged in the exploratory process that creating something new requires. It doesn’t preclude the leader from maintaining control, as long as that’s clear from the start. A lot of heartache can be prevented with a few explicit statements. Here’s an example:

“I’d like to hear your ideas on this, which will help me make a more informed decision.”

Notice there was no negotiating about who would make the final decision in that statement. In collaboration, everyone knows that they are contributors, not decision makers.

Belief #2: Collaborating means everyone must agree

False. Reaching full agreement in any group of humans is a heavy lift. No two brains are alike, and so we each bring our own hardwiring (based on our unique combination of experiences) to any collaboration. No two people on a team will see a challenge or an idea the same way – and that’s the beauty of teams!

Leaders don’t need to spend a lot of time making sure that everyone is in agreement before moving forward. Establishing early on that a consensus will be reached when everyone can live with a choice, whether they love it or not, will allow for faster, cleaner decision making.

True. Collaboration IS time-consuming, but remember that people will support what they help to create. Think about how much more time it takes to move forward when there is no support from the team. Collaborating is an investment in time that it will pay off in the long run, when everyone can live with the conclusion, and time doesn’t need to be spent restating, reselling, or revisiting a decision that was made following a good collaborative process.

Belief #4: Collaborating means telling people what the leader is thinking, then helping them understand and align to that thinking

True. Collaborating isn’t really about telling, offering statements of fact, and seeking alignment to those facts. It’s more about asking questions: probing, prodding, and exploring together to tease out new ideas, potential obstacles, and building on one another’s creativity.

A leader who asks “what’s the biggest flaw in this logic?” creates a safe space for disagreement and a team that owns accountability for identifying risks, up front, where they can be dealt with.

Maybe. Remember the old story about the pizza delivery guy? He arrived at a midnight product development session to find the team deadlocked. Asked for his opinion from the frustrated team, he offered his outside perspective. He knew nothing about the endless debates the product development team had been circling around, but he was a potential consumer of the product. His uninformed input broke through the deadlock and had everyone cheering, patting him on the back, and offering to buy him a beer!

Outside perspective can be a great thing because our brain’s thirst for status can keep us from asking the questions that might be perceived as uninformed. Non-experts can bystand the issue and ask those questions, without having them be perceived as “dumb” questions.

Belief #6: Collaborative leadership is a process that leads people to the same conclusion, through a series of iterative conversations

It isn’t likely that the collaborative leader who knows all the answers is being very collaborative. Questions like “Don’t you think…?” and “Shouldn’t we just…?” aren’t going to elicit much input. In fact, they’ll probably lead you to your predetermined conclusion. While you might think you’ve collaborated, your team will know better. If you know the answers, don’t pretend to seek collaboration. You’ll damage trust and make future collaborations far more difficult.

False. Collaboration IS the best approach for exploring options that need exploring. Informing the team of a decision handed down from above isn’t collaborative, no matter what color glitter you roll it in. Be clear about the need for collaboration, and be even more clear about what you mean when you ask for it.

Therefore, collaborative leadership is also possible, even preferable, for those situations where buy-in is important. In fact, buy-in is most easily created through collaboration. Include planning, know your intention, know your desired outcome, and communicate all of this up front – even if it all seems obvious to you.

Which of these common beliefs do you agree or disagree with? Share your effective leadership insights with us in the comments.

Why Being Wrong Matters »