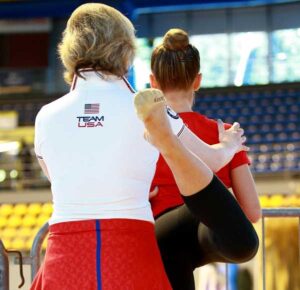 You might not embrace the idea that you’re a coach. Maybe your image of a coach is that guy on the sidelines yelling at the players: Do this, stop doing that, hustle, hustle, hustle!

Fair enough. I agree, you don’t want to be that kind of coach.

But what if you’re the kind of coach who, after a miserable practice session, takes a player aside, puts an arm around him, and says, “What’s up, buddy?” A coach who listens without judgment, helps the player sort out his problems, and sends him on his way with a little pep talk?

Isn’t that the kind of leader you want to be?

One of the things I show my coaching clients is how to be coaches themselves. I teach them to ask questions that lead team members to their own solutions.

I recently worked with “Mary,” a leader who was trying to figure out how to tell team member “Rhoda” that a client wasn’t happy. I suggested that, instead of telling, Mary might do some asking.

Chances are that Rhoda knows she has a problem. She just needs permission to tell Mary about it.

Either way, only when the problem comes out in the open can Rhoda start to address it.

And only if Rhoda identifies the path herself is she likely to be able to follow it. Neuroscience says that we can never convince anyone of anything. We can only lead them to their own insights. If you’ve ever been frustrated when someone hasn’t followed the excellent advice you gave, now you know why. That’s how human brains work. People are much more likely to act on the ideas they surface for themselves.

So I suggested some questions Mary could ask. Bosses often default to broad questions like, “How are things going with the MTM account?” Unfortunately, broad questions invite broad one-word answers like, “Fine!”

I encouraged Mary to ask more specific questions. As we went, Mary identified some of Rhoda’s likely responses.

1. “What’s the biggest challenge you’re having with MTM?”

Rhoda might say, “Nothing, no problems!” But at least Mary has opened the door and made it OK to talk about problems.

Because Rhoda is a strong performer, Mary expects more. She thinks Rhoda will say something like, “The client is frustrated about something, and I don’t know what!”

If Mary keeps listening, she’ll hear some version of an idea I’ve heard from almost everyone I’ve ever coached: “This is really frustrating! I’m a good problem solver. But I don’t know how to solve a problem that I don’t know what it is!”

2. “What’s the best thing about working with MTM?”

This question lays the groundwork for Rhoda to find ways to use the strengths of her relationship with the client. For example, Rhoda might say, “They’re open communicators, and they like to explore issues in conversation.” Mary can acknowledge Rhoda’s contribution to this strength while segueing into the next problem-solving question.

3. “What kinds of questions might you ask them to surface any issues?”

Notice that Mary has already shown Rhoda what to do in this very conversation! Rhoda can ask the client things like, “What’s the biggest challenge in this project? What’s the best thing about this project?”

Coaching, according to the International Coaching Federation, means “partnering with [others] in a thought-provoking and creative process that inspires them to maximize their personal and professional potential.”

Remember, your high performers are good problem solvers. They just need to find the right problem to solve. To do so, they need you to be their coach.

If you want to know more about coaching your problem solvers, sign up for our webinar Helping Colleagues Solve Their Own Problems–Virtually on December 8. It’s free!

Think about the last time you had to deliver a difficult message to an employee.

How to Deal with the Most Annoying Person in the Office »